HOW TO ENJOY THE DEFINITIVE SWANSEA DYLAN THOMAS EXPERIENCE

Dylan Thomas is without doubt one of Swansea's and Britain's greatest exports. The poet, most famous for his seminal play Under Milk Wood, grew up in our "ugly, lovely" city (his words, not ours!) and wrote most of his work here.

This year in Swansea, there's plenty going on to celebrate the centenary of Thomas birth – we've already had Elijah Wood staying with us at The Dragon Hotel filming the 2014 movie Set Fire to the Stars.

Here’s where you need to go, and what you need to see, to get the quintessential Dylan Thomas experience in Swansea: 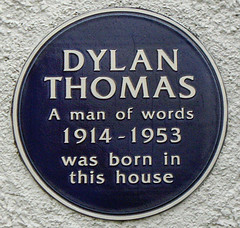 Where better to start than where Dylan Thomas was born?

Today Thomas’ house has been completely restored to how it appeared back in his day – including the tiny box bedroom where he wrote the bulk of his work.

In the suburb of Uplands, just a few minutes’ walk from the centre of Swansea, sits 5 Cwmdonkin Drive, the modest semi-detached house where the poet grew up and lived until he was 23.

EAT AT THE KARDOMAH CAFÉ AND RESTAURANT

In the 1930s, when Thomas was growing up in Swansea, the Kardomah was one of the young poet’s favourite haunts. He would join the poets Charles Fisher and Vernon Watkins, as well as the composer Daniel Jones, artist Alfred Janes and other bohemian members of the so-called ‘Kardomah Gang’, to talk politics, art, religion and science deep into the night.

The Kardomah was destroyed during the Blitz of 1941 (Thomas’ play Return Journey to Swansea emotionally describes the café being “razed to the snow” when he visited the site) but a new Kardomah emerged a few years later.

Today, it’s one of Swansea’s best cafes and still retains the arty, bohemian ethos that so endeared it to Thomas and the rest of the influential Kardomah Gang.

Established in 1690, and with wine cellars that were used in the 15th century, the No Sign Bar is Swansea’s oldest pub.

The Kardomah Gang often strayed from their beloved coffee shop to drink something slightly harder, and became somewhat infamous for their drunken antics after enjoying one too many. The No Sign Bar was also a favourite with Thomas and his journalist friends when he was trying to make a name for himself on the local newspaper.

The dedicated Dylan Thomas Centre in Swansea’s Maritime Quarter is a gret place to go if you’re looking to learn more about Wales’ greatest poet, or even just to see some interesting curios from his life.

Here, you can see the writing shed where Thomas wrote Under Milk Wood, read previously-unseen manuscripts and scripts, listen to audio recordings, look at personal images and enjoy a range of literary events.

There are also experts on hand to answer questions and debunk any myths about the poet.