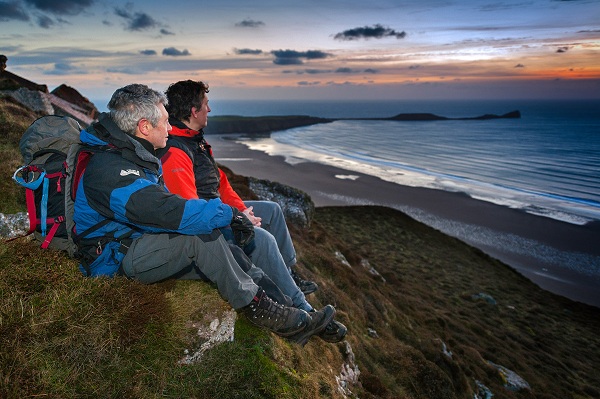 The UK’s first Area of Outstanding Natural Beauty the Gower is 19 miles by 6 miles of award winning beaches, dramatic cliffs, picturesque villages, rolling countryside, hills, valleys, woodland, dunes, marshes and breathtaking views. Steeped in history, the area boasts many ancient sites, monuments, caves, castles and landmarks. The oldest human burial chamber dating back to 3,500 BC can be found there. The peninsula is a haven for walkers, offering short family walks to routes for the more experienced walker. Amongst other activities, you can try horse riding, water sports, golf, visiting one of many pick your own fruit farms and of course, sample some of the local delicacies cockles and laver bread.

Find out more about the Gower Peninsula.

This quaint Victorian seaside resort is the ‘Gateway to Gower’. Its main features are the long promenade leading to Mumbles Pier, its 13th century castle complete with panoramic views of Swansea Bay and its lighthouse, built in 1794. It holds a number of restaurants (including two of the most talked about ice-cream parlors in the region, Joe’s and Verdi’s) and a large variety of individual shops and galleries.

Phenomenal expanses of mountain scenery perfect for hiking, the Brecon Beacons are South Wales’ highest ground. Separated from the Black Mountains by the Usk Valley the three prominent vantage points, Pen y Fan, Corn Du and Cribyn, have tremendous views to the Malverns and across the Bristol Channel to Somerset.
Here, you can also find the wonders of Dan yr Ogof National Showcaves Centre for Wales which houses attractions for all the family ranging from the most spectacular showcaves complex in Northern Europe, one of the world’s largest dinosaur parks and a replica of an Iron Age farm.

Read more about the Brecon Beacons.

Afan and Vale of Neath

The ‘Waterfalls Country’ extends across the wooded valleys from Neath to the southern edge of the Brecon Beacons National Park. Furnished with spectacular waterfalls the area makes for wonderful opportunities for strolls and hikes alike and offers a huge selection of fantastic mountain-biking trails. Margam Park offers beauty, history and wildlife set in 850 acres of glorious parklands within which you will find a magnificent 18th century Orangery, an impressive Victorian Gothic Mansion House, a 12th Century Chapter House and restored historic gardens surrounding the castle and monastic ruins.

Discover more about Afan and the Vale of Neath.

Situated at Blackpill on the way to the Mumbles picturesque Clyne Gardens stretches over 50 acres of beautiful woodlands complete with winding streams and follies and is famous for its azalea and rhododendron displays during springtime.

This popular destination for an afternoon stroll, Singleton Park is famous for its Herbaceous Borders planted in 1921 and its Botanical Gardens located within the old walled garden which was once part of Lord Swansea’s estate. It is also a popular venue for outdoor events such as Party in the Park and the Swansea Show.

Cwmdonkin Park officially opened in 1874 however, due to its close proximity to the childhood home of Swansea’s most famous son, the park will forever be connected to Dylan Thomas. Truly Victorian in style, the park boasts tennis courts, a bowling green and has been planted with many exotic curiosity plants and trees from all around the world.

An on-going restoration project, the story of Aberglasney House and Gardens in Carmarthenshire’s Tywi Valley spans many centuries but is still shrouded in mystery and intrigue. Its spectacular gardens and magnificent house have been inspirational to poets since 1477 and is regarded as one of the finest gardens in Wales.

Dedicated to horticulture, conservation, science and education, The National Botanic Garden of Wales is a new concept in botanic gardens and a model for the 21st century. With 568 acres of gardens and its centrepiece Great Glasshouse with some of the rarest plants in the world, it is a relaxing and informative way to spend the day.